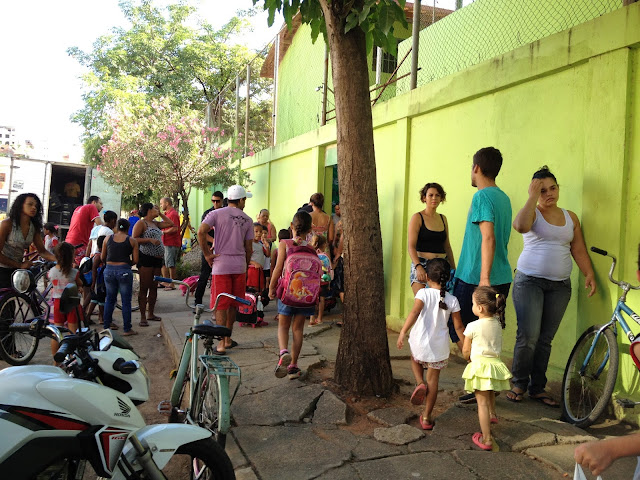 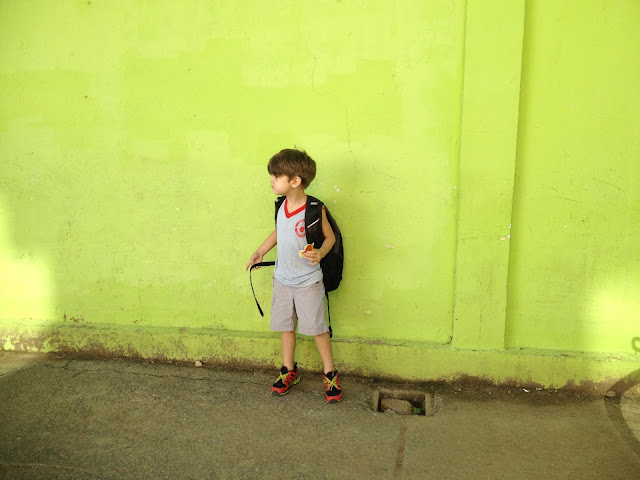 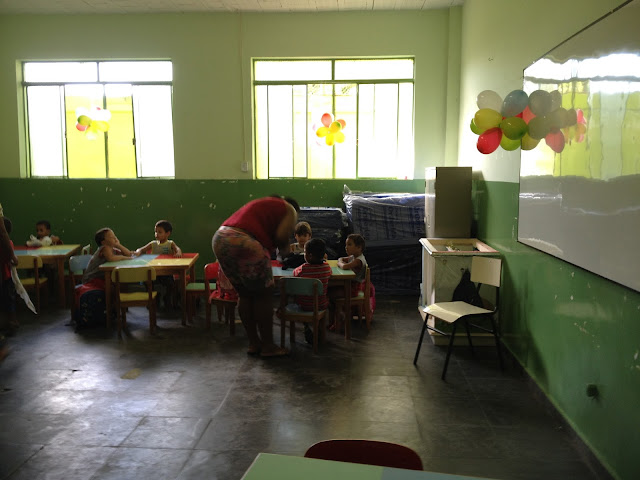 [I can see from my husband that the system here is lacking in a lot of things that I consider common knowledge. He's an incredibly intelligent person - I'm amazed sometimes by the gambiarras and other things he comes up with. However, he knows very little about how the human body works. Very little about sciences. (TMI, I'm sure, but when we were dating and I had a yeast infection he was absolutely horrified. He didn't understand what it was or how I got it, accused me of not cleaning well enough or cheating. It caused such a huge argument that I forced him to call his sister - who works in a clinic - to explain it to him). He believes that somersaults will break a child's neck. Walking on cold tile with bare feet will cause you to become sick. And a plethora of other "wives's tales" type misinformation that we were educated about in middle school.]

My son attends a municipal school that is two blocks from our house. The school day is from 8am to 4pm. There are 15-20 kids in his class; he has a teacher and at least one aide every day. There is a lot of good to say about the school, but a lot of bad too. There have been some "holidays" where we showed up to the school to find it closed. Brazilians love a four day weekend and have holidays for every tiny occurrence. I mean really, one of the biggest holidays here celebrates a "holy" statue that some fishermen found. (Okay I'm not religious in any sense and I find the Evangelicalism here insane so excuse my blasphemy).

Last year the school decided that they would renovate and re-vamp it into a proper elementary school. They also created an age cutoff, so now only 4-8 year olds attend and the older kids attend a newly built school in a developing section of the city. There was a big meeting at the beginning of the school year to address the changes and we parents had to sign a type of contract that listed health and other information about our kids. We also had to identify who would be allowed to pick up the kids after school and were told IDs will be created for those people. The principal said that they would no longer allow other kids to pick up the children (I mean seriously, there were 10 year olds picking up 4 year olds). She also said that they would crack down on pick up times - because apparently some parents weren't picking up their children until 6pm or later - and wearing of the school uniform. Every school in our city has a t-shirt uniform; our uniform is red and grey. We opted to buy the sleeveless version, since the schools do not have air conditioning. Now that it's getting colder, I might buy one with sleeves, but he usually just wears a sweater in the morning. I love the t-shirt uniform because a lot of the kids are extremely poor and I think it helps equalize the students and take the focus off of "who has what." (They already do that enough with their backpacks and shoes). I wish all schools in the US had the same requirement.

One thing they mentioned at the meeting was that they wouldn't allow the parents to bring the kids into the classrooms for drop offs any more (it was taking too long for the classes to begin and too many students were crying for their parents). After the meeting, the parents would have to drop the students off at the doors and for a few weeks they would have escorts for the children. There were not a lot of parents at the meeting and I told my husband I had no doubt that there would be some angry parents the next morning. And naturally there were. I even heard one woman yell, "Oh I'm going in. They think they can stop me, but they can't." And I couldn't help but think, "Well lady, if you're so concerned with your child's schooling, maybe you should make it to the meetings." But that's Brazil.. Anyway, I was very pleased with the meeting and all the changes to the school because it feels like the school is taking itself more seriously.

They don't get any homework, so I have no idea what he's learning. I do know the classes are by age, so this year he is with all 4-year-olds and next year he will be with all 5-year-olds. I also know they sing songs and do small art projects. His favorite song is about an alligator who will bite your ears off if you don't hide them. You can listen to the song here. So very Brazil. We always ask what he learned today and one day he told us, "We learned not to kick our colegas (colleagues), not to bite our colegas, and not to hit our colegas." I don't know if that was a part of the curriculum or need-driven learning, but it's good stuff to know!

My son will only be in school here until he is 9 and my daughter will only attend for one year. Since we don't know what he's learning at school, we do supplement at home. We have a few pre-school workbooks and we're working on reading with some Dr. Seuss books. I try not to stress out about what he's learning now because he's still very young. He also has (undiagnosed) ADD and I know he won't get the proper attention he needs here. Special education programs are non-existent at our school. But, being in school all day really helps because it keeps him occupied and helps him exert energy. (Which makes the both of us happy). I'm more concerned with him developing social skills at this point. So we'll take it for what it is and work on the important stuff at home.
Posted by J De Melo
Labels: Brazil, elementary school, Governador Valadares, kids