I'm the type of person who works out because she likes to eat. You know what I mean? I work out a few times a week, but only to counter the ridiculous amount of Coca Cola and Kit Kats I consume on any given day. When I was in the military, I had the luxury of using an hour of my work day to exercise at the gym on base. As a mom, that was a huge win-win. No membership fees, no extra time away from my kids. But if I'm being honest, I was really eating like shit during that time. Breakfast was whatever I could grab from the Dunkin Donuts drive through; lunch was whatever fast food I could pick up around the base. Here in Brazil, I eat really well (except for the Kit Kats and Coca Cola). Fast food is super expensive, processed food isn't abundant (what we do have is also pretty expensive - I'm looking at you, R$10 small bag of Doritos), and it's a cultural norm for employees to return home for one or two hours to eat a home-cooked meal.

I've been lucky enough to lose most of the post-Alessandra baby weight solely from eating well. After Maicon, I was in great shape because I ate incredibly well and utilized a personal trainer. So I'm in this weird place now where I don't have the baby weight anymore, but I also don't have any strength. If you can't tell where I'm going with this yet... I need to join a gym. Annnddd like anything in Brazil, trying to join a gym has been an adventure. I've used my sister-in-law's gym a few times, because it's close to my house, so I figured it was time to officially join.

Problem #1 - I'm only going to be in Brazil for eleven more weeks. I don't really want to sign up for a yearly membership if I can only use it for half of that time. (We'll be back in January). However, the gym was super cool about this problem! I asked if I could simply switch the membership to my husband's name while I'm gone so that he can use it and they agreed. Cool, cool, easy enough so far.

Problem #2 - paying. I've tried to open a bank account in Brazil and it was such a huge mother fucking pain in my ass that after the third bank, I said screw it, I'll just use my husband's account. The gym employee asked if I wanted to pay using debit or credit. I said, "Whatever, they're both the same right?" (I do understand the slight difference, but money leaving an account is still money leaving an account). The woman cocked her head and paused. She needed an answer. Thankfully, my sister-in-law was actually at the gym and had just come over. At this time, another gym patron also came over and explained to me in English that in Brazil, if they charge as "credit," they charge monthly; "debit" is charged the total amount all at once. My hero! I told the woman I'd like to pay monthly, so please swipe as credit. The woman handed me back the card and said, "This card is only debit." My bad! I had handed her the card without the MasterCard emblem. I gave her our other card and she swiped again. Again, she handed the card back to me and said, "Sorry, this card is also only a debit card." I turned back to my hero, because now I was really confused. The card was a debit card linked to our savings account, but it had the MasterCard emblem. Why couldn't I use it as credit? The man explained that in Brazil, the cards have to be specifically designated as credit, debit, or debit/credit. Since ours was only designated as debit, it couldn't be processed as credit. At this point I felt like an idiot, so I took out my own US bank card and explained that I didn't know that because in the US I can use my bank card as debit or credit, as long as it has a MasterCard/Visa/whatever emblem on it. I have no idea what the point of the MasterCard emblem on Brazilian bank card is. Thankfully (again), my sister-in-law was there, so she offered to use her card and just have my husband give her the money every month. Now that my husband has signed onto that deal, we gotta get back to the gym to seal the deal.

Problems solved! Gym membership (almost) obtained! Now I just have to get myself over there each day.
Posted by J De Melo No comments:

This post has nothing to do with Brazil or expat life - instead, I wanted to write about the postpartum anxiety that I experienced after having my first child. It's something that I didn't even recognize having until I had my second child three and a half years later.

When my son was born, I was filled with intrusive thoughts about him dying. They lasted for months and never ceased; it was absolutely overwhelming. And because of those thoughts, it was impossible for me to "sleep while the baby slept." At my son's two month well-baby visit, his pediatrician mentioned that he was concerned about me and concerned that my extreme sleep deprivation would lead to my son being injured. (That I would be too out-of-it to properly take care of him). I had no idea that I was in bad shape; I thought this was the normal "new baby sleep deprivation" that everyone talks about. But, I was convinced that he would pass away while he slept, so I had to watch him during every nap. Fear of him dying consumed my thoughts. I would cry about it while he napped. When he was awake, I would rock him, certain that every time would be the last. I even told my mother that if anything happened to him, I would kill myself. I just had to let someone know, so that they would understand what had happened, should they stumble upon the scene.

I was a slave to whatever requirement or compulsion popped up in my head. I might lay in bed and think, "Did I lock the door? I'm 100% certain that I did, but if I don't check, it will be unlocked and someone will come in and hurt my son." Most often the thought would be that if I closed my eyes while he was napping, I'd wake up and he'd be gone. It was like living with Reverse Shrodinger's Child. He was probably fine in his crib, but if I didn't check on him, then he wouldn't be okay. The only way I could be certain of his state was to look. It was crippling. It was exhausting. I looked at other moms and wondered how they could ever appear so happy while I felt like I was drowning.

When my second child arrived, I realized how unhealthy I had been with my first. When she slept, I knew she would be okay. I didn't spend every moment obsessively worrying. But I honestly thought that what I was experiencing with my son was normal. Everyone jokes about how babies keep moms up all night and I had never heard of postpartum anxiety, so what was the problem? My doctors had asked the standard postpartum depression questions - if I had any thoughts of harming myself or my baby - and I said no, because I didn't, so I assumed everything was fine. I didn't realize that my internal voice answer of, "Oh my God are you kidding me! No! I'm completely controlled by the compulsion to protect him from harm! I can't sleep, leave the house, or function because I'm so concerned!" was an answer equally deserving medical intervention. My husband never really saw what was going on, because he worked from 6 am to 8 pm and went to sleep around 10 pm, Monday through Saturday. (Hey, when you're in your mid-twenties with student loan debt and a new baby, times are tough).

I wish so badly that someone had stepped in to say, "Jeanie, you need to talk to someone" or "Jeanie, this is not normal." (Other than the single comment from my son's pediatrician regarding sleep). But this wasn't something that I was open about, because I had never heard of it. I, more or less, hid in my home and didn't deal with it. So if you're experiencing compulsive thoughts about harm coming to your baby, you should speak to your OBGYN or family practitioner. As a society we've done a good job of opening up the discussion about postpartum depression and removing its stigma, but we still need to get postpartum anxiety into the conversation. Just like postpartum depression, postpartum anxiety has nothing to do with you. You didn't do anything to bring it on. It's (in part) a result of a combination of extreme hormonal changes, massive life changes, and lack of sleep - and moms with a history of anxiety or depression are at a greater risk of developing it. My experiences with each baby were light-years away from each other. I wish I could go back in time and truly enjoy my first newborn and be the healthy mommy that he needed. But since I can't, I hope that writing this post will help someone who's in the same situation.

And with that, I leave you with some resources about postpartum anxiety:

Parents - The Other Postpartum Problem Anxiety 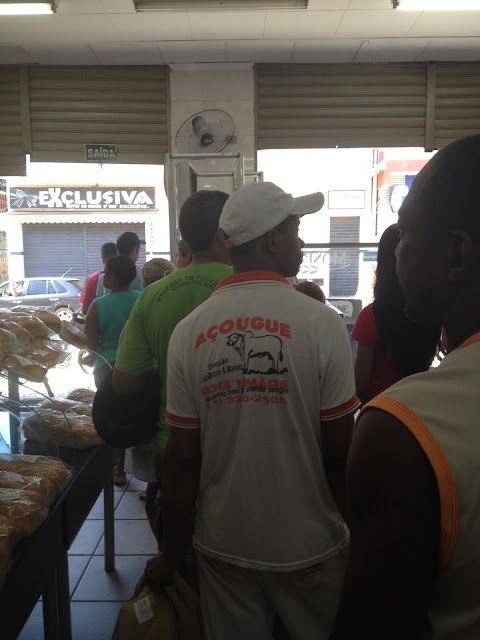 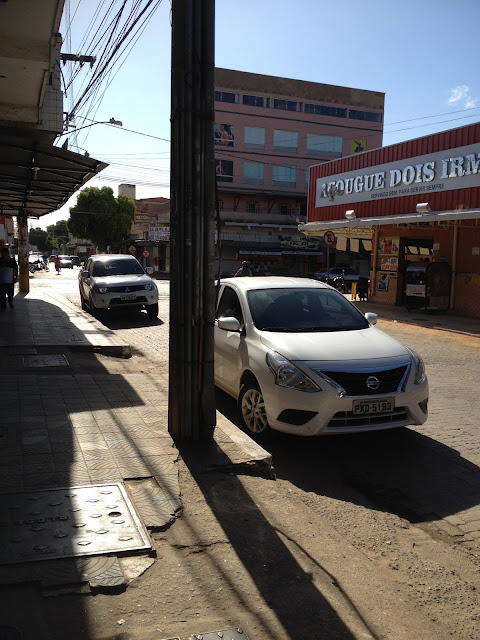 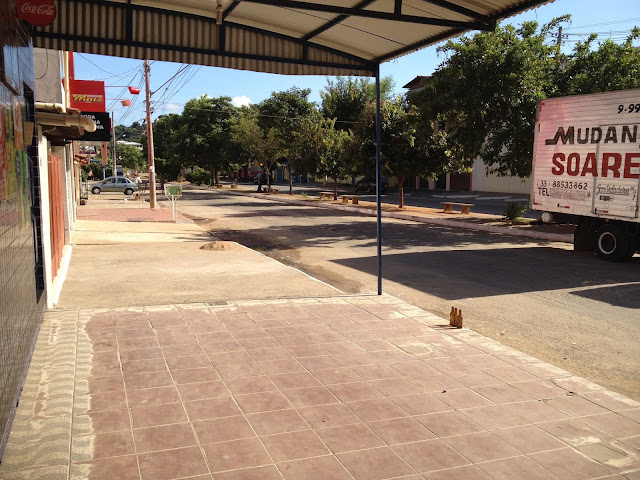 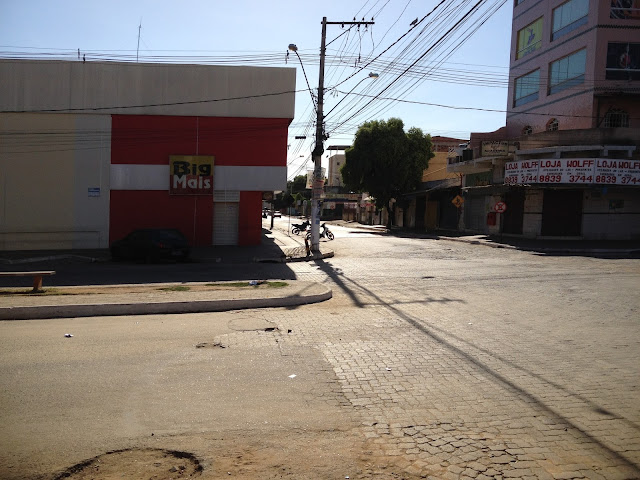 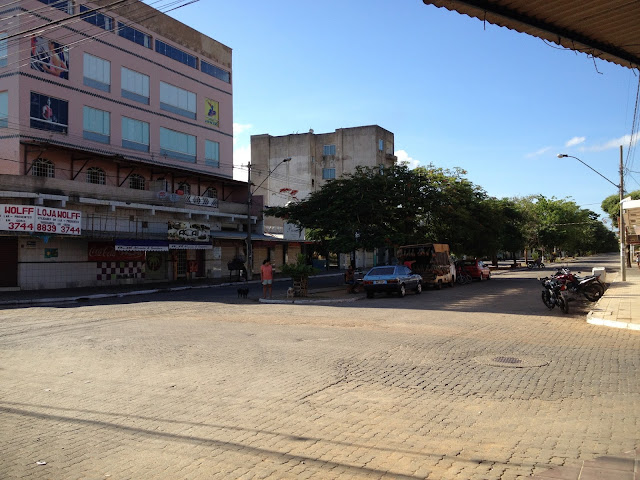 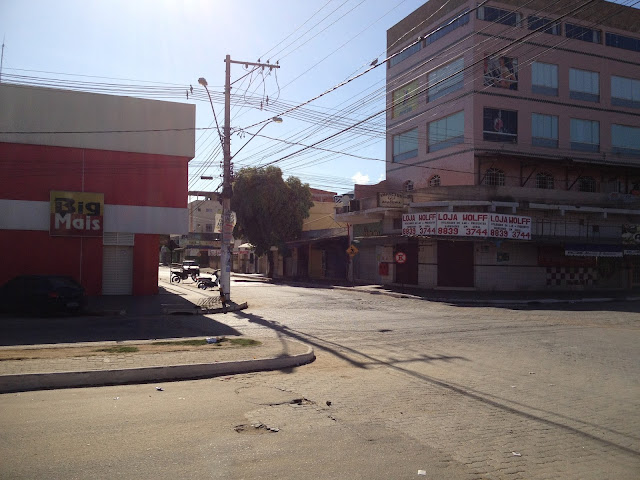 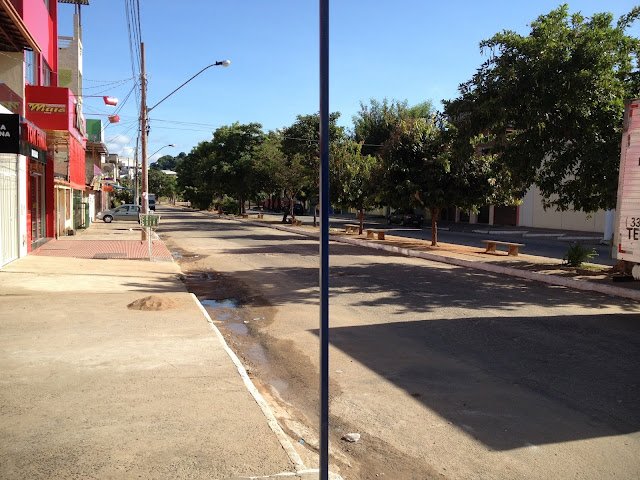 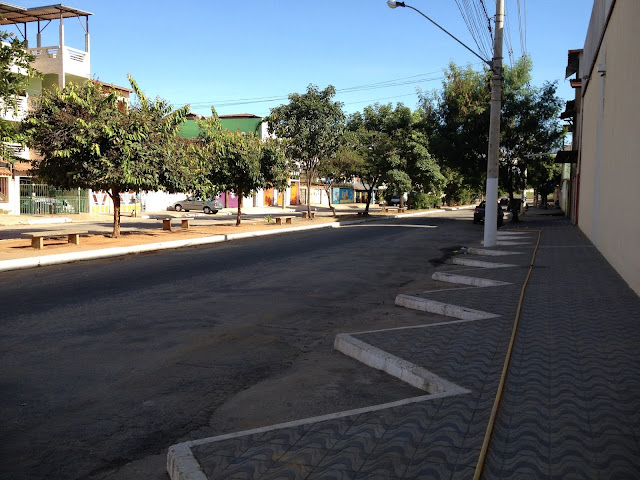 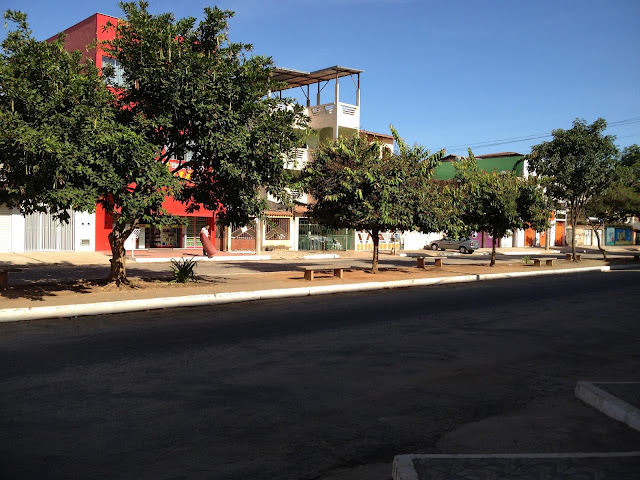 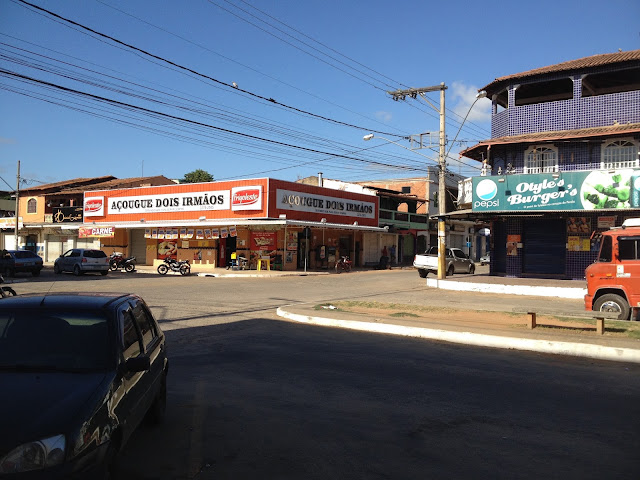 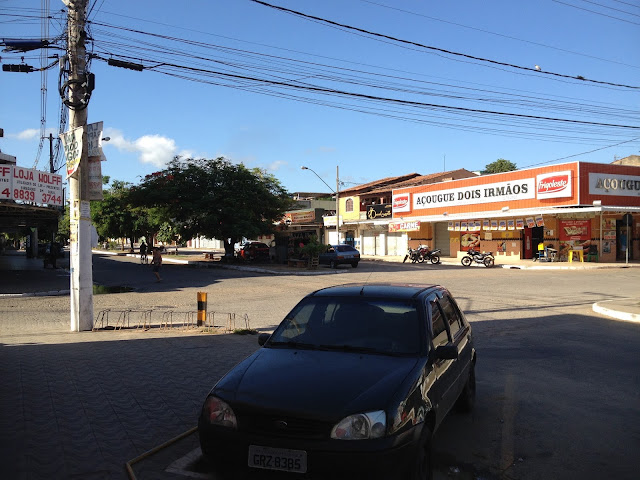 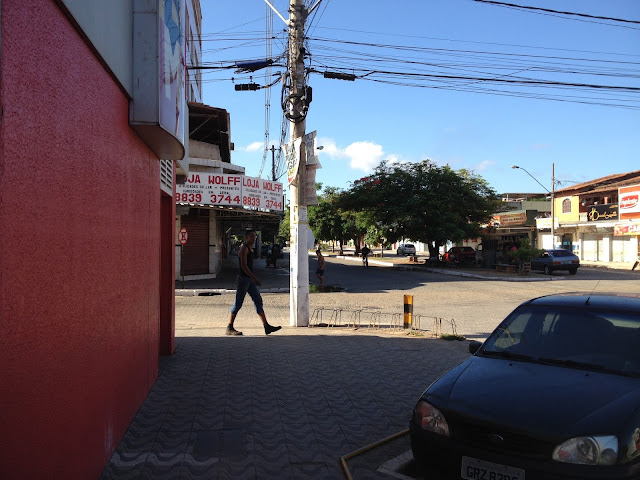 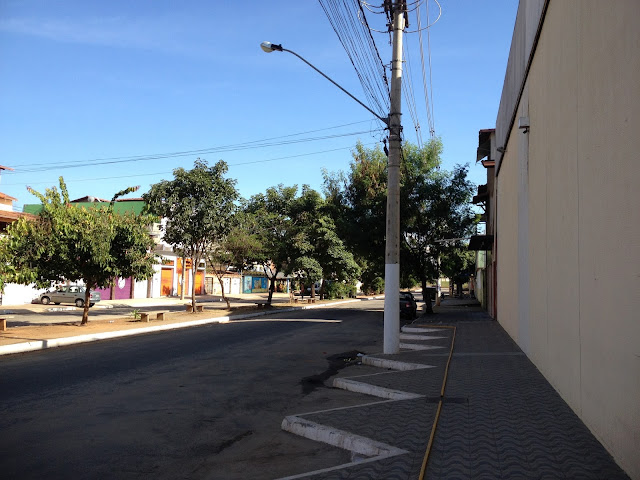 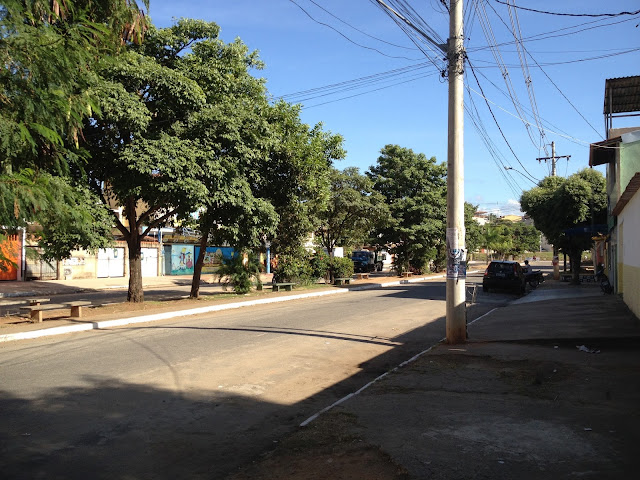 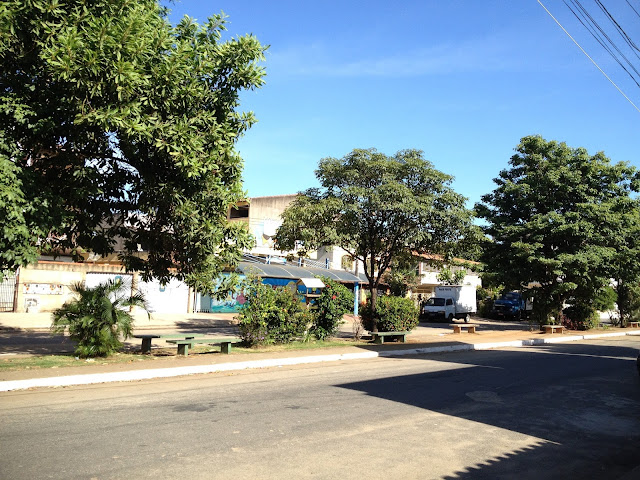 It's been so long since I've posted - but for good reason! The kids and I will be heading to the States in a few weeks to spend six months with my family. So, I've been working my ass off (gotta pay for those round trip tickets!) and running around trying to prepare. In addition to that, we've had birthdays and holidays and life in general.

I took these photos of our neighborhood on a holiday when the streets were deserted. The only store that was open was the bakery, which was packed with people buying bread (as seen in the first picture). Before we moved to Brazil, we purchased a house in another neighborhood, renovated it, and rented it out. Our plan was to live in that house, but then a friend of ours in the States mentioned she was selling a building in Jardim Perola, a few neighborhoods away. My mother-in-law always wanted to live in this neighborhood, so we purchased the building with her and renovated it to include two apartments, a store, and an amazing rooftop patio. And thank god we did, because I love our neighborhood. On our block we have a restaurant owned by our friends (Rei Davi) (and they're building a hamburger shop now YAY!!!), a pharmacy (Drogaria Mais), the supermarket (Big Mais), a bar (Otyle's Burgers, which ironically does not sell burgers), a variety store (Loja Wolff), a butcher (Acougue Dois Irmaos), and a fruit/veggie store (Sacalao - also owned by our friends). Two blocks away is the elementary school and at the end of the block is the beautiful lake. And of course, we have an amazing community of neighbors. Everyone knows everyone, everyone helps everyone, and there is a sense of community really missing from life in the States. One day when we do move back to the States, it will be very, very difficult to leave this neighborhood.
Posted by J De Melo No comments:
Newer Posts Older Posts Home
Subscribe to: Posts (Atom)