Going Back, Back to Cali, Cali (Well, Connecticut)

In five days exactly, the kids and I will board a plane to spend almost six months in the States! Why so long? We were only going to stay for a few weeks, but when my mother-in-law passed away, my husband had this epiphany that we should be spending more quality time with extended family and friends (seconded). Since my family and friends are scattered across the US, there's no way we could visit everyone in a few weeks. We'll be based out of my mom's house in Connecticut, but bouncing around to New York, New Jersey, Miami, and Denver. Sadly, Farley will not be joining us as he has his own small business to run. He has worked really hard to build up his clientele and has three employees to manage, so six months is much too much time away. Thankfully, if we're missing Farley or he's missing us, we can just exchange our tickets for an earlier return date.

I haven't been to the States in two years and I'm very accustomed to living in Brazil, so I expect some reverse-culture shock upon arrival. I might be totally wrong and slide back into U.S. culture as if I never left, but here are some things I think might throw me for a loop:

Driving. As much as I hate driving in Brazil, I'm pretty used to the idea that driving includes the swarm-of-bees-like presence of motorcycles, bicycles, and drunk people flinging appendages in the road (oh have I not mentioned the time I drove into a drunk guy's arm? That's a story for another day). Although as a fringe benefit of the chaos, my nephew knows all the English swear words and the (what I thought was international) hand symbol for "what the fuck." I think I'll have a hard time letting go of the anxiety and constant "under fire" feeling I've become used to. Also - paved roads. Most of the roads in my town are either a) dirt, b) brick, or c) poorly paved and full of holes. I can't remember what driving on a smooth road feels like. Lastly, highways. The highways here in Brazil are most similar to what we would call a route in the States - and a country route at that. Normally one lane in either direction, curvy, dangerous, but decently paved. 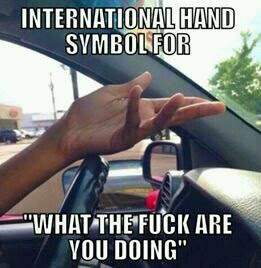 Food. One of the things that surprised me about Brazil was how small the portion sizes are! A one liter soda is shared by four people?? Two years and a loss of some-odd pounds later, I'm accustomed to the much smaller, dare I say reasonable, portions. Even at McDonalds in Brazil, the portion sizes are more in line with what a human should actually eat in a single meal. I don't plan on eating too much processed food while we're there, but I will need to be mindful of how much I'm eating. (Although I plan on consuming massive amounts of pizza.. so we'll see how it goes). And I will take full advantage of being able to cook meals that don't include rice and beans. I love to cook and I can't wait to utilize all the spices and seasoning I can't find in Minas Gerais. My Pinterest board is overflowing with ideas and my mom is thrilled to have a personal chef in the house. (By the way, I've dedicated one half of a luggage bag to spices, maple syrup, and the like for our return trip.)

Basic Manners. I think I've hammered on it enough in this blog that I don't need to go into too much detail, but uh.. not throwing garbage on the ground, walking on the right side of anything (as opposed to taking up the right, left, middle, and swerving for the hell of it), QUEUES (I mean, I feel absolutely British in my reverence for queues compared to the Brazilian lack of regard for them), showing up on time, as well as not showing up to someone's house randomly (I have two kids, I need a forewarning so I can clean, ok?!).

Speaking in English. I do work for a company that requires me to speak in English, but outside of clients and my family, my life is in Portuguese! Will I feel overwhelmed by understanding everything said by strangers? I kind of value that I can turn off my conversation reception if I just stop actively listening. I probably will not miss having someone whip around and stare at me when they hear me speaking English (as has happened more than once). I do look forward to being able to communicate complicated ideas and feelings without struggling to find the right word. On the other hand, I signed up for an online Portuguese class so I don't lose any fluency.


Expats who've returned to their home countries, how did you feel upon your first trip back? Did you sink into the culture or did you experience reverse culture shock?
Posted by J De Melo